Linking up with the MOB (Mothers of Boys) Society today.


Earlier today I posted the following article onto my facebook page. It was mainly in response to a couple of friends who were struggling with their teens and some rebellion issues. However, if you've been on facebook for long, you've likely seen this floating around. Take a moment and read it. 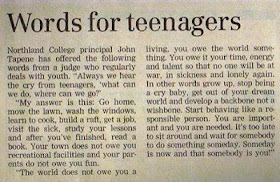 I wasn't expecting to receive any responses from it - let alone the passionate remarks it stirred. And given that I have some strong thoughts on teens in our society, I figured I'd write my response here instead of in several long comments on my facebook status.

I may have young children, but I also have two boys on the cusp of being teens. In fact, I do consider my 12 and a half year old a teen because of his maturity level. Because of this, I've been giving much thought over the last year to how I should approach the teen years with my children. I don't want to settle for the status quo of backtalk, rebellion, and stupid decisions. I'm not naive - I do know some of that will occur, but I certainly hope it will not be the norm for my children.

To that end, I've had my oldest read a book entitled "Do Hard Things" by Brett and Alex Harris. It's an excellent call for teens to go beyond the low expectations of society and meet their potential. I blogged a bit about it here if you are interested. The basic premise is that around the world and throughout history, teens have been expected to do ... something. They aren't just children still living at home. They aren't yet adults. But they are adults in training who no longer want to be considered children. And their capabilities are amazing!

As parents it's our responsibility to give our children wings as they approach adulthood. You give them the opportunity to make choices, to fail or soar, to feel the consequences of their actions (good or bad) within the safety of your home and care. You guide with tough love, much grace, and unending forgiveness. And most importantly, you must model with your own life the type of adult you hope your child will become.

In almost all other societies, teens are considered productive members of society. They are expected to contribute, to add to the community and to the family. They are not permitted to live in fantasy or seek out "fun" unless the work is done. And work isn't just homework. It may be chores at home or on the farm, it may be a steady job. It may be hard and it may be inconvenient and it may be dirty. But teens are capable, strong, and smart. They can do much more than we in America give them credit for!

My problem with our society is that I see so many young twenty somethings living in their parents' basement, playing video games, and avoiding the job market. I'm not talking about honest, hardworking young adults who just need a boost to get on their feet. I'm talking about the MANY who are avoiding adulthood in favor of continuing a childhood that has stretched much too far. This isn't some nebulus group of people "out there". I've met them. They're in our town, they are people I care for.

Before writing this, I shared the article with my two oldest boys at the dinner table. I told them nothing of what I was about to read except that I wanted their opinions. I stressed that I'd be fine with them having differing opinions of each other and of the article. I read it, and I waited.

Both said they thought the article was right on. One said he felt it was a little harsh in the wording but that he agreed with the premise. I asked them to explain their thought process in agreeing - still not having voiced my opinion - and they shared that they know they are capable of much more than what is typically required of kids. They feel they can be important and productive. They want to have responsibility.

I didn't have to ask my next question, because I already knew the answer. They also want to be kids. And therein is the conundrum of teens. Part kid, part adult. They need time to play, to be silly, to hang out with friends, to get some extra sleep as they grow. But when we let that be the entirety of teen life, we're actually doing our children harm, not good. How is that preparing them for adulthood? How does silliness ready them for a job or marriage? How does expecting them to cop an attitude contribute to their well-being?

We tell our kids when they talk back to us that it's unacceptable. And we tell them why. Not only are they to respect their parents under God's laws, but under man's laws, they can be fired from a job for sassing their boss. If you are rude to those you meet, you'll soon be a lonely human being. You'll quickly burn bridges and you'll lose the respect of those around you.

It's the same when we give our children chores and responsibilities. My children have school year round. They also have chores year round. They are required to help in the garden in summer. They vacuum, clean bathrooms, do dishes, wash laundry, and help with their younger siblings. Am I stealing their childhood? I don't believe I am. I do expect a lot from my children, but I don't expect more than they can do. I would never ask a 4 year old to get out the big vacuum and clean the floors. The vacuum is as big as he is! It would be an unrealistic and frustrating expectation. Instead, I ask my 4 year old to make sure he puts two rolls of toilet paper on each toilet in the house so that we don't have issues of running out while someone is on the pot. He has the satisfaction of contributing to the household in an age appropriate way.

It's the same with our teens. I wouldn't normally ask my oldest to simply put toilet paper on the toilets because he is capable of so much more. Instead, he is the one cleaning the toilets. He is the one vacuuming. He's capable, he feels good when he has accomplished the task. And here's the kicker. When he's done with work, he's free to play. It's not an exclusive issue. Teens need the play and the responsibility. But the play should come AFTER the responsibility, not before. And that's where much of our society has it backwards. Many want their kids to have all the fun they can and if there's time left over they can help out. Because of this, we're raising lazy adults who feel entitled to an easy lifestyle and are going into massive amounts of debt to acheive that lifestyle.

All this to say: Love your kids. Love them enough to help them reach their potential - in all areas of life. Take a good look at their capabilities and give them the respect they long for by recognizing how mature they can be if given the chance. And when they fail, which they will, be there to help them back up, encourage them onward, and celebrate when they succeed the next time around.
Ali at 9:23 PM